Jesse was a Civil War Veteran and was a prison guard for the Confederate Army at Andersonville Prison also known as Camp Sumter. 57th GA Infantry

The 12th Alabama Cavalry Regiment was made up of men from Blount, Cherokee, Dekalb, Etowah, Jackson, Jefferson, Marshall and St Clair counties. It fought at Murphreesboro and Chickamauga and through Longstreet’s East Tennessee Campaign. The regiment was involved in numerous encounters around Dalton, Georgia. One of it’s companies lost 20 killed and wounded while defending a bridge near Rome. It lost 25 or 30 men in a fight with Union General Stoneman’s raiders. At Campbellsville the 12th repulsed Brownlow’s Brigade losing 45 men. It disbanded the night before the surrender with about 125 men present.

Baker. — The Baker family, in North Marion, will next be noticed. Squire Neill Baker, the first known in that section, was a sturdy Scotchman and an excellent citizen of the northern section of the county; he married Polly McArthur, and left many descendants in his section. One of his grand-sons, A. M. Baker, herein before mentioned as a prosperous and progressive man, owns the old homestead. One of his sons, Edmund Baker, married a Miss McGist [McGirt]; he died without issue. Another son, James Baker, married a Miss Bracy, and moved to North Carolina where he died and left a family of several children.

An older son, John D. Baker, married Miss Lovedy McPriest, and died, leaving her with two sons, Albert M Baker, above spoken of and Neill A. Baker. The widow Lovedy Baker lives with her son Neill A. Baker in Georgia. Old man Neill Baker had but two daughters. The oldest married William McKay of North Carolina and moved to Mississippi where his wife died.

The other daughter, Jeanette, married just at the close of the war, Captain Gilbert W. McKay, who was at one time captain of Fairlee’s old company and who may be remembered by many who now live in the town of Marion as he lived there when he went into the war. Both are now dead leaving two children surviving, John W. McKay who lives at McCall, S.C. and Mary who married John Millsaps and moved to Georgia where they now reside.

The Chatmoss Plantation is located in the Mt. Olivet community in Henry County. Only about two miles from Mt. Olivet Christian Church. If you go through Martinsville on route 58 towards Danville, turn right on Chatmoss Road you will find the property. This road winds through what was the old Chatmoss plantation. It is now a golf course and the country club is the remodeled great house on the plantation.
Some of the original house still remains inside the country club.
The original house was still in tact as recently as 1955.

Benjamin and Ruth had at least 13 children.

McCarty on one marker; McCarthy on the other. 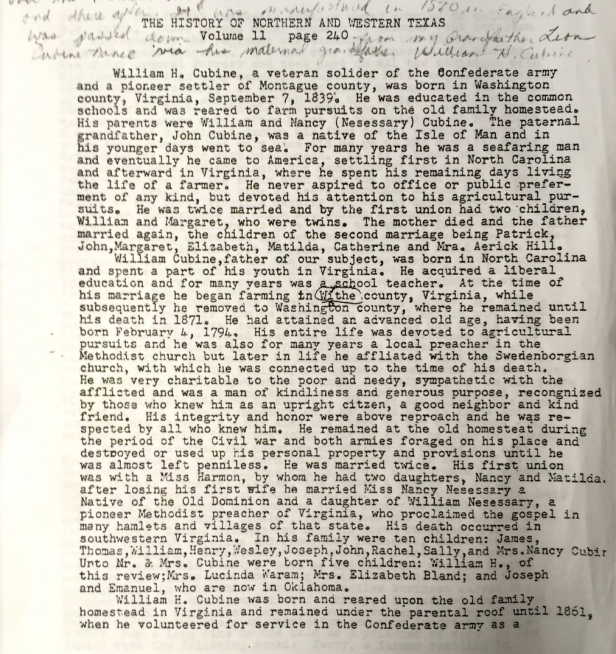 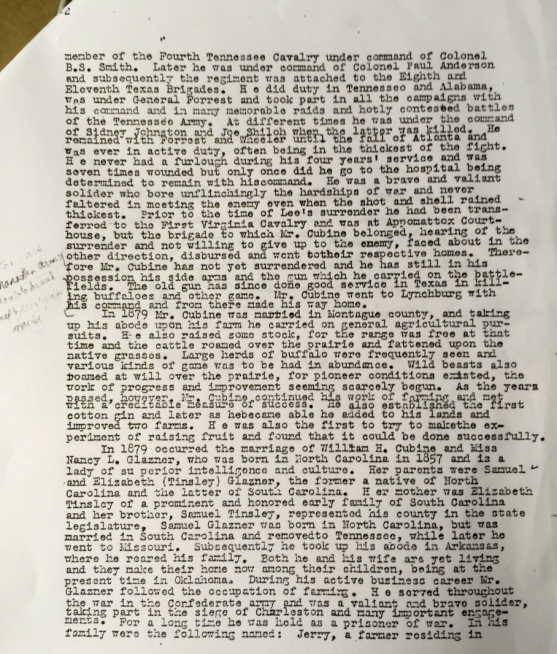 Veteran Of Gray Is Dead.-AUSTIN, Tex.-
Thomas Evans Riddle, private in the Army of Tennessee, doughty admiral in the Nebraska Navy, and proud Colonel of the Confederate Air Force, is dead today.- Just two weeks shy of his 108th birthday, Riddle died last night at 10:10 p.m., CST, to leave only four surviving veterans of the Civil War.-The white-haired little man with the shy pixie smile had been ill since January. First he had pneumonia, then a failing heart, but his grim battle for survival astounded doctors. They said old age killed him.- He died at the Texas Confederate Home for Men where he had played dominoes, met old friends and newsmen, and stay in bed most of the time since January 1950. He had wanted to live to be 110 and to die at his home in Wichita Falls, Tex. He is scheduled to be buried, his family said today, at Burkburnett, Tex. When has not been decided.- Got Five Bullets-Riddle, for 18 months of the Civil War, served as a private in Co. 1, 22nd Regiment, Army of Tennessee. He liked to tell of his days under Robert E. Lee and kept a picture of the southern commander over his bed. “Five times I thought my life called. was not worth a minute.” “Snipers were shooting at me from the top of trees. I didn’t know I was hit, but my general says to me, “Thomas, you’re full of bullets,” and I looked and had been shot five times in my side.”-Besides his other mythical titles, Riddle also held colonelcies on the staff of the governors of Texas and Louisiana. He proudly pointed to framed citations on the wall of his room here attesting to his various “ranks.”- Parties Big Events-But his biggest events in his recent years were his birthday parties. With a clean shave, a Confederate tie and polished slippers he sat on the side of his bed and cheerfully received his guests. Although he could barely hear, even with a hearing aid, he always had answers to questions. He was tickled pink when he received several proposals for marriage after a lawyer filed a claim for him for part of a multi-million dollar race horse fortune.-The petition said the old soldier was a half-brother of Man O’War’s owner, the late Samuel D. Riddle.-The “colonel” had been married three times. “Outlived two of them and divorced the other,” he would say with shining eyes.-Of the four survivors of the bloody War between the States, Walter W. Williams, 111, of Franklin, Tex., is the oldest. The others are Albert Woolson, 215 E. Fifth Street, Duluth, Minn., the sole Union survivor; and Confederates William A. Lundy, Laurel Hill, Fla.; and John Salling, Slant, Va.—The Abilene Reporter News, Abilene, Texas, Saturday Evening, April 3, 1954; Pg. Front Page

Born on May 8, 1842, near Austin in Travis County. Wounded at the battle of Chickamauga in September 1863. After the war he began rounding up wild, unbranded cattle in Central Texas. 1867–68 drove a herd to California. On December 20, 1870, he married Annie Elizabeth Harris; they had five children. General Manager of the XIT Ranch from 1885-1905. 1905 assisted in organizing the AMARILLO NATIONAL BANK and was one of the largest stockholders.Later helped organize the Midway Bank and Trust Company at Dalhart,Tx and served as it’s President. January 13, 1912,while sitting in the lobby of the MetropolitanHotel/Ft.Worth,TX, he was shot by John Beal Sneed. The circumstances surrounding thsed actions resulted in the famous BOYCE-SNEED FUED.